The swell had risen and I'd been missing out on the morning offshores because 'I had to stick to my list', that list being my little black book of to do's and thoughts, the Small Dark Dictator of My Days.

Or one of them at least.

Yesterday the rebel in me said stuff it, revolution time, so I allowed myself a morning surf, while it was still good, instead of a grovel in the sharky dark in the onshore slop. (Note: A four metre Great White cruised through the line up two days ago.)

Winki was busy and a bit odd, but some four to five foot runners were whistling through at times, so it had a lot to say.

All I had to say was 'just four good waves'. Three good waves out of three had me thinking a jackpot had been hit, knowing the place for over 40 years allowing a well read roaming of the lineup that for once kept yielding payoffs.

Sitting out the back and aiming to go in, I started to daydream about the last wave. "A big one and just wide enough to block the guys up the line. A barrel at the end of a good 200 yards would be nice"

Blow me down if that is what appeared before me.

A cracker, broke up and out while I paddled for the lip line, catching everyone else inside. I managed a late take off, a long run, with a few happy turns and TWO good tube rides, in out, in out, as I hurtled towards Lowers. Straightened off and virtually stepped onto a low tide rock.

A good way to start a day.

The pics: Bells just after I got out of the water. Winki was better. 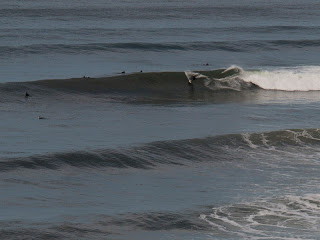 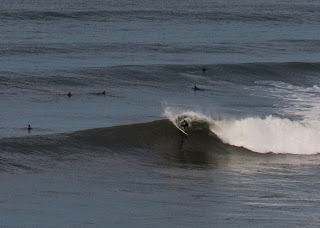 It's just come to the end of a very long run of swell down here.

Over the weekend it was very big indeed, and though Responsibility coupled with Catholic Guilt got in the way of abandoning all to the waves, I did manage some fun surfs. Saturday in particular was pretty damn massive, Bells and Winki a highway to hell with a sweep that drove most away, me included, with the few souls who braved it enduring a half mile or more sideways for, in the case of Winki, less than 50 yards out.

Those that did were managing a wave or two an hour so I dove down the coast to Winki's ugly sister, as it offered an easier paddle out if you timed it right, which I did, for a change.

Eight to ten feet by my call, and after four pretty fun ones including a first very similar in size if not bigger to one I managed there last year. Round two saw me bashed and belted by a series of absolute floggings. I kept at it 'til a good(ish) one to come in on, accompanied by a headache from the beltings that left forty eight hours later.

The swell stayed until yesterday, slowly dropping but keeping the smiles on high beam.

The rest of the time has been spent working towards getting The Reef to its next stage, ie a film release, which is very much in the lap of the gods, and, on a whim, sticking some daydreams up on RedBubble just in case they earn me enough for the next block of wax.

The shot: a departing snap of a random wave just before leaving the car park on Saturday. It was the end of a ride and not a set. 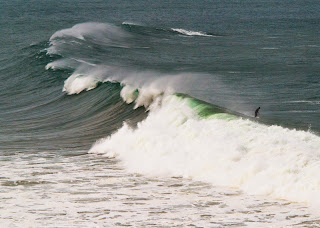 Dusk is the new black it seems.

Since moving down to the coast to create a bit of space the late 'look at the sea' has been my regular evening escape, with oft times a quick dip as well.

A visit to the gym has been supplanted by a surf, something I cannot complain about, and with that betwixt hour comes the light.

Sitting in the lineup in the darkening, the sights I see, the sights I see. The clear air and the south westerly aspect, facing the fronts, grants an anticipation of what is to come, the next day or more often the next hour as a black wall creeps then roars from the horizon to me, or simply a blast of light erupts as the sun clears the cloud banks. The world just lights up, a shiver of warmth to break the chill before the light fades, the shore beckons.

More often than not I don't have the camera, it not being of the waterproof variety, so the view from the drink is missed, which is sad as so often what a view it is.

The other thing about dusk being the new black is too often lately dusk has been my point of view.

I had a friend point out to me the other day that I am not the happy chappy I used to be, and I tend to gripe about the finances a little too often.

Let's just say putting your life on the line to change it, getting into the arts as opposed to the commercial arts and timing it to coincide with the Big Crunch has done us no favours. Hero to zero. Combine that with a couple of kids full of potential but intent on testing the boundaries of what should not be done, and perhaps going a couple of miles past that and you have a happy man made very grumpy.

Now since most of what we create comes from our point of view, I've decided to change mine. My good mate Richie, one of three good mates named Richie, points out often enough, '...what is the glass? Half full or half empty?"

From the risks some great things have happened, some epic projects and absolutely incredible people to work with.

So today it's half full, the sun is shining, my kids are healthy, my wife still loves me, mad fool that she is, and I discover the other day The Reef is touring east coast Australia next year.

I may go for a little surf in the little waves later, but now, though it is Sunday and Fathers Day, I've got some work to do.

Pics: Dusks, and the surf from last week. It was rather good. 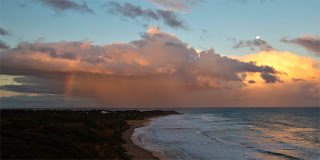 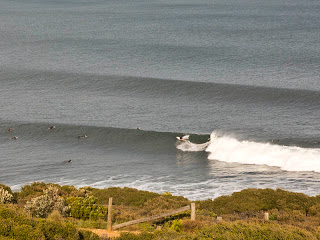 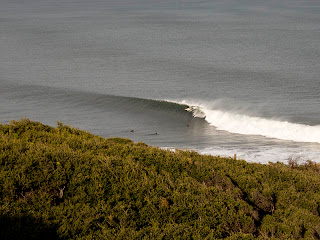 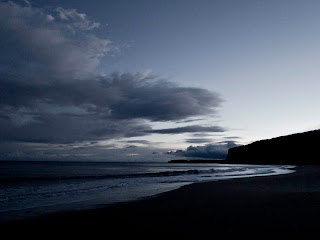 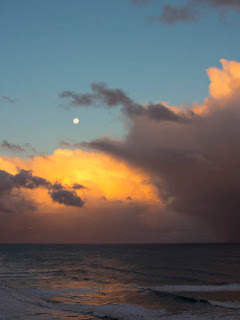